Lakeport Legacies · The Adventures of the Bastianelli and Pianalto Sisters: History from the Tontitown Museum

The Adventures of the Bastianelli and Pianalto Sisters: History from the Tontitown Museum 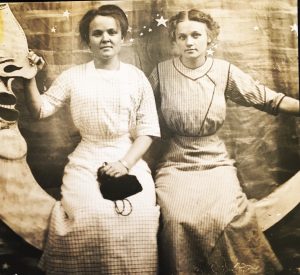 Photograph of Mary Bastianelli (l) and Katherine Pianalto Ceola (r) taken around 1917, possibly at the Washington County (AR) Fair. Mary is wearing an engagement ring; her sweetheart, Jack Zulpo, was killed in France in 1918. Courtesy of Tontitown Historical Museum

The Bastianelli & Pianalto sisters were part of the first wave of Italian immigrants that came to the Sunnyside Plantation in Chicot County in the 1890s. Later they immigrated again to Tontitown in northwest Arkansas with Father Pietro Bandini. Many in the generation who immigrated as children followed Old World marriage habits, meaning young couples delayed marriage until they were financially established. Few walked down the aisle before their late twenties or thirties. So what did a young woman in the 1910s in rural Arkansas do with an extra decade or so as a single woman? Between the five Bastianelli and Pianalto sisters, they lived in at least four states, taught school, became nurses, and aided priests. One sister was a long-time schoolteacher in Lake Village. Another was among the first graduates of St. Edward Nursing School in Fort Smith. Two exercised their voting rights for the first time in California. An examination of their lives reveals fascinating information about an often “silent” generation.