The flow of the Mississippi River is often quite deceptive. In a manner of only a few hours it can go from a wide, placid, almost lazy stream as illustrated by early drawings to the most frightening torrent imaginable. 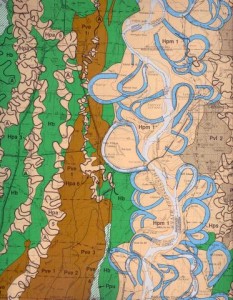 This often turbulent passage transports sediment all along its route, carving large chunks of earth, along with large trees and structures, from the outer edges of its sinuous flow to deposit tons upon tons of gravel, sand, silt, clay downstream in newly formed point bars and islands. In fact, the Lakeport Plantation itself is situated on the point bar deposits created by the meandering Mississippi some several hundred years ago.

For some considerable length of its course the Mississippi River flows east or west creating wide, looping bends. Four of the most famous of these features, called collectively the Greenville Bends, were located just north of the Lakeport Plantation. Filled with snags and sawyers, the passage of these bends were long, tedious, and often dangerous. Often, in periods of high current, the river cuts across the narrow necks of the oxbows it has created, to cut-off whole areas from the main channel and create the ox-bow lakes like Lake Chicot near Lake Village and Lake Lee in Mississippi. A river-boat pilot who was to become one of America’s most famous authors, experienced the awesome power of the river during the dark of night not far from the Lakeport Plantation when the American Cut-Off was created. This dynamic action of the river creates and reworks an environment composed of sandy natural levees, point bars with their ridge and swale topography, as well as clay-filled back swamps with distributary channels; each with its own characteristic soils, flora and fauna. As a result of its constant motion, swinging back and forth across its valley, the Mississippi has been constantly adopting new channels and courses as it moves toward the Gulf; channels and courses which have been intensely mapped over the past two hundred years.

European and American explorers and travelers from the middle of the 16th Century onward have reported on the incredible richness of the valley’s flora and fauna. May 5, 1819. We were swept round by the strong current of the Mississippi in our keel-boat between two green islands covered with rushes and cotton-waters of White River. This is all a region of deep and universal inundation. There was from six to ten feet water over all the bottoms; and we had a wide display of that spectacle so common in the spring on the Mississippi, – a dense forest of the largest trees, vocal with the song of birds, matted with every species of tangled vegetation, and harbouring in great numbers the turkey-buzzard, and some species of eagles; and all this vegetation apparently rising from the bosom of dark and discoloured waters… It is late in the season before the floods recede; and fever, musquitoes, alligators, serpents, bears, and now and then parties of hunting Indians, are the only tenants of these woods.

(Recollection of the Last Years… Timothy Flint (1819). Found in A Garden in the Wilderness: The Johnsons and the Making of Lakeport Plantation, 1831-1876. Ph. D. dissertation, University of Arkansas. Fayetteville, Arkansas Tom DeBlack (1995) p. 36.)

Flocks of birds including immense numbers of migratory fowl nested on the islands and the sheltered sloughs. Fish by the hundred-weight swam in the rivers and back away from the active channels the region teamed with deer, while herds of buffalo inhabited the scattered prairies. But most of all the region has been made famous by its great and long lasting floods; the greatest of which occurred in the spring of 1927. Since that time many billions of dollars have been spent in additional attempts to regulate the flow of the Mississippi to meet the needs of the region’s commerce and to provide ever increasing large methods of water-borne commerce.