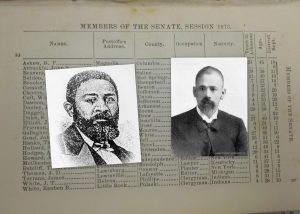 William H. Grey (left) and James T. White (right) superimposed on an 1873 roster of Arkansas State Senators. Grey, born free in Washington, D.C., came to Helena in 1865. He served in the 1868 Arkansas State Constitutional Convention and as a representative in the Arkansas House in 1869. James T. White, native of Indiana, represented Phillips County in the Arkansas House in 1868 and the Senate in 1871 and 1873.

During Reconstruction (1867-1874), Republicans, including the first African American office holders, controlled most political positions in Arkansas. Many people assume that African American office holding ended with Democrats’ political “Redemption” in 1874. Despite Redemption, office holding on the local and legislative level remained quite diverse until 1893. Southeast Arkansas continued to elect Republicans, both black and white, along with Democrats at the county level and to the general assembly. This electoral diversity makes Southeast Arkansas unique and worthy of further examination.

Rodney holds a B.A. in Political Science from Arkansas State University, and a M.A. in History from the University of Central Arkansas. Rodney spent 10 years as a real estate broker, ran for State Representative in 2004, and was named one of the 25 Outstanding Young Executives in Northeast Arkansas.  Rodney wrote his Dissertation, “Divided Saints: Democratic Factions in the 1874 Arkansas Constitutional Convention” under the direction of Dr. Patrick Williams at the University of Arkansas at Fayetteville. Rodney specializes in Political History and Southern History. He will join the faculty at Williams Baptist College in Walnut Ridge, Arkansas this fall.