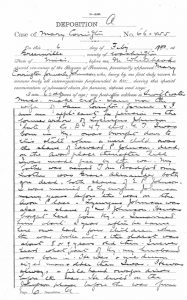 Page from the deposition of Mary (Johnson) Covington, February 1900

Lakeport Plantation director, Dr. Blake Wintory, will present “The Other Lycurgus Johnson: U.S. Colored Troops and Civil War Pension Files in the Delta” on August 25, 2016. Wintory, will discuss on-going research at Lakeport to learn more about the life stories of slaves and their lives during the post-war Reconstruction era at Lakeport and in the Delta through pension files held at the National Archives.

During the Civil War, nearly 200,000 African American men served in the Union Army, with over 47,000 coming from Arkansas, Louisiana, and Mississippi. Many of these men and their families filed for pensions from the federal government. Those files, often filled with interviews with family, friends, comrades, and former owners, can be a trove of information on 19th century African American life, sometimes providing complete life histories for former enslaved laborers.

Among the pensions examined by Wintory is one for a Lycurgus Johnson. This Lycurgus, who happens to share the name of Lakeport’s owner, enlisted at Lake Providence, Louisiana on May 5, 1863 in the 8th Louisiana Regiment Infantry (African Descent), Company D– later renamed the 47th U.S. Colored Infantry. Sgt. Johnson died just over a year later on July 20, 1864 in Vicksburg of tuberculosis, then called “consumption.”