Today, many people associate the Mississippi Delta as the birthplace of the Blues. Tourists from across the globe visit the Delta each year to, as one travel writer put it, “soak up the raw authenticity” of the region. Steeped in agriculture (and specially cotton), the Mississippi Delta is indeed a unique place and the stories of Blues legends and Civil Rights heroes deserve to told and retold. But there is another legacy of the Mississippi Delta which is often overlooked, and that is the important role the region played in the Civil War. Seen by many historians as a sideshow to more significant campaigns, the reality is that the Delta was vital to Confederate interests and was the target of repeated Union attempts to utilize the region’s waterways as an avenue of invasion. 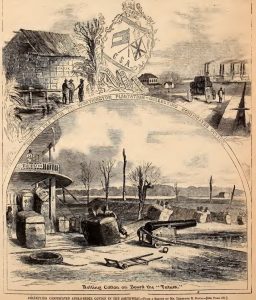 “‘Cotton Pile’ Near the Worthington Plantation – Collection Confiscated Cotton” and “Rolling Cotton on Board the ‘Tatum’,” Harper’s Weekly, May 2, 1863