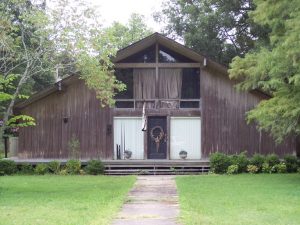 Designed by architect Edward Durell Stone, the 1955 home of Jay Lewis is one of the best examples of Stone’s later residential architecture, which reflected classical ideas, rather then exhibiting Frank Lloyd Wright’s influence.

Lakeport Plantation’s monthly history talk, Lakeport Legacies, will feature Mason Toms, the Main Street Arkansas Exterior Design Consultant and Preservation Specialist.  Drawing from examples across the Arkansas Delta, Toms will discuss the region’s most interesting Modern architecture such as the Jay Lewis House in McGehee designed by architect Edward Durell Stone. Exemplifying the optimism and booming economy of the decades after World War II, Modernist architecture is gaining the appreciation of both historians and architecture buffs for its clean lines, functional planning, and futuristic detailing.