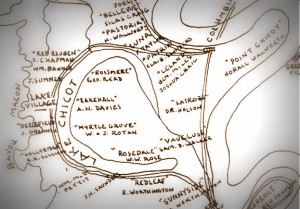 The Rossmere Plantation, founded in 1847 by George Read IV, was located on the east side of Lake Chicot south of Stuart’s Island. In 1861, the plantation had over 1300 acres and 61 slaves. One of those slaves, Lucretia Alexander, was interviewed by the WPA in the 1930s.

Annie Read Reeves, a widow with four children, left New Castle, Delaware in October 1861 during the first year of the Civil War. They arrived at the Rossmere Plantation on Old River Lake in Chicot County on November 22. Annie and her brother George Read IV (1812-1859) were the great-grandchildren of George Read I, a signer of the Declaration of Independence. Her late brother founded Rossmere in 1846 and her sister-in-law, Susan (Chapman) Read, still resided there in 1861. Reeves’ diary (1861-1863) details her trip to Chicot County and experiences during the Civil War. Wintory will discuss the diary and what we know about the Read family and plantation from other sources: deeds, tax records, Susan Read’s letters, a memoir by Annie’s daughter, and a slave narrative.