Between 1936 and 1938 the Federal Writers’ Project collected over 2,000 oral histories with former slaves. While Arkansas collected more histories than any other state, no interviews were collected in Chicot County. However, six narratives taken in cities across Arkansas are by former Chicot County slaves (or their children):  Fanny Johnson, Nannie Madden, James Morgan, Lucretia Alexander, Nannie Jones, and Mattie Nelson. A seventh narrative by a former Chicot County resident, William Lattimore, describes his move from Mississippi to Arkansas.

Fanny Johnson was 76 years old in 1936 when she was interviewed at her daughter’s house in Hot Springs. She recalled she was a 5 years old slave on the Woodfork Place near Grand Lake when the Civil War started. Her parents were born in Maryland and were brought to Nashville, TN by Woodfork, who owned several plantations throughout the South. Fortunate for her family, Woodfork “didn’t believe in separating families.” The overseer on their plantation was good to them “most of the time.” She recalled “Just once did anybody on the Woodfork place get whipped” unlike at the plantation next door. There the overseer could be mean with the whip. She stated “Why you could hear the sound of the strap…the ‘niggah drivah’ would stand and hit them with a wide strap…Some they whipped so hard they had to carry them in.”

After the war, they were taken (presumably by Federal troops) to the The Bend, Jefferson Davis’ former plantation near Vicksburg. She later returned to Arkansas, living and working in Jefferson County and in Oklahoma. She also worked as a cook in tourist towns like Eureka Springs and Hot Springs. 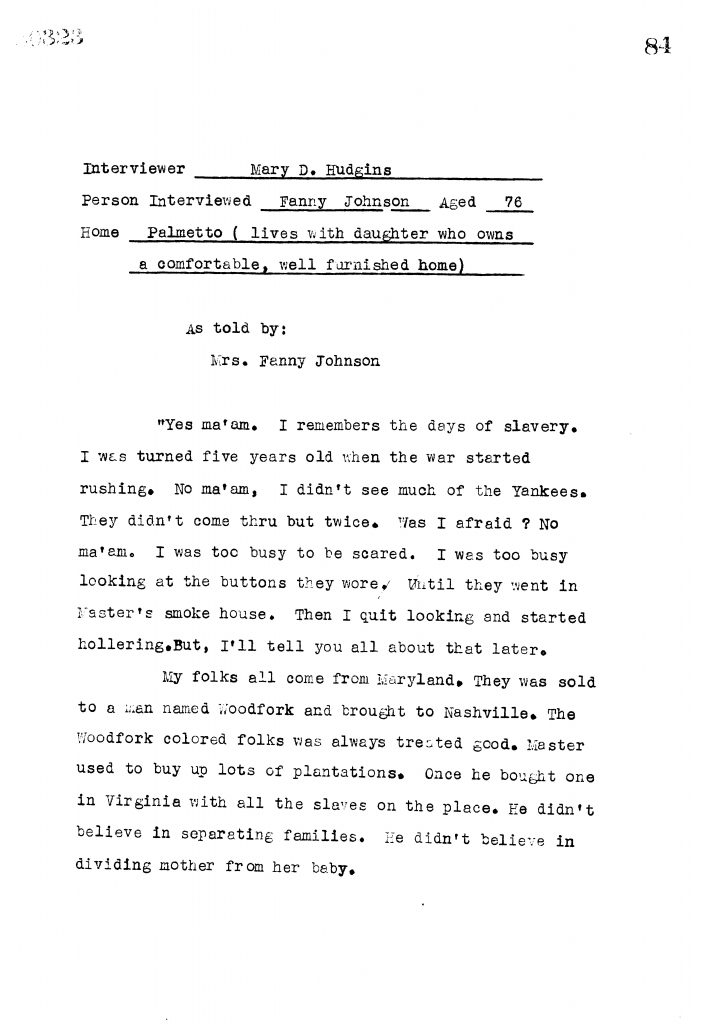 Nannie Madden, interviewed in West Memphis at age 69, was born in Lake Village in 1867, just after slavery. It’s not clear from her narrative, where her parents were enslaved. Her father served in the Union Army, and after the war rented a farm at Red Leaf Plantation, then managed by Isaac M. Worthington. Her mother died there in 1876 and her father died in West Memphis at another daughter’s house at age 88. She stated, “I farmed and worked all my life.” Nannie recommended Booker T. Washington’s autobiography, Booker T. Washington’s Own Story of His Life and Work,and a biography, The Master Mind of a Child of Slavery–Booker T. Washington by Frederick E. Drinker.

James Morgan, interviewed in Little Rock, was born in Chicot County in 1873. His father, Aaron Morgan, was brought to Chicot County as a slave by his master, Charles McDermott. Morgan believed his father and mother were brought here from Georgia and South Carolina, but the 1880 Census shows Aaron and Rosa Morgan were both born in Louisiana–where Charles McDermott was from. His mother’s first husband was sold during slavery and Aaron and Rosa met after freedom. Once free, Aaron stayed on the McDermott plantation and sharecropped. Later, according to James, Aaron bought 160 acres of government land for $1.60, and “built a house and cleared it up.”

Morgan worked 35 years on the Missouri Pacific Railroad; 22 years as a foreman. He retired in 1932 and received a pension from the government for his work on the railroad.

Lucretia Alexander, interviewed in Little Rock at age 89, was a 12 year old slave on the Rossmere Plantation in Chicot County when the Civil War began. She was born in Copiah County near Hazelhurst, Mississippi and arrived at Rossmere when she was “six or eight years old.” She remembered the plantation’s four overseers by name. The last overseer, Tom Phipps, was “mean…mean as he could be.” She recalled, “I’ve seen him take them down and whip them till the blood run out of them.” Once, he whipped her and “aimed to kill.” Protected by her mistress, Susan Chapman [Read], Phipps was run off the plantation.

Lucretia’s mother and father were both born in Virginia. Her mother, Agnes Toliver, “was treated well during slavery times”; but her father was sold five times, because he “would take nothin’.” Later, Lucretia’s mistress purchased him for $1500 without ever seeing him.

During the Civil War her mother stayed on the plantation because her children had been “refugeed…off to different places to keep them from the Yankees.” Lucretia’s brother returned in 1865, but she did not see her sister until 1869.

When freedom came they were told “You’re free as I am” by a Union soldier.  She recalled, “old colored folks…that was on sticks, throwed them sticks away and shouted.”

After the Civil War, Lucretia stayed on the Rossmere Plantation for about 4 years and was paid $12 per month, plus food and cloth. Next she worked in the fields, making more money. Around 1923, she moved to Little Rock. She stated, “I have been a widow for thirty years. I washed and ironed and plowed and hoed–everything. Now I am gittin’ so I ain’t able to do nothin’ and the Relief keeps me alive…I used to take a little boy and make ten bales of cotton. I can’t do it now. I used to be a woman in my day. I am my mother’s seventh child.”

Nannie Jones was 81 years old when interviewed at her home in Pine Bluff. Living at Dr. Gaines’ Plantation, she was only 4 years old when the Civil War started. She remembered being a cute little girl around the house…”a pet.” But when freedom came, she recalled people “jumped up and down and carried on.” Her mother was sold down river from Kentucky, but died when Jones was small. Her father likely fought for the Union Army for a short time. As an adult she worked “in the field and anywhere. I worked like man.” 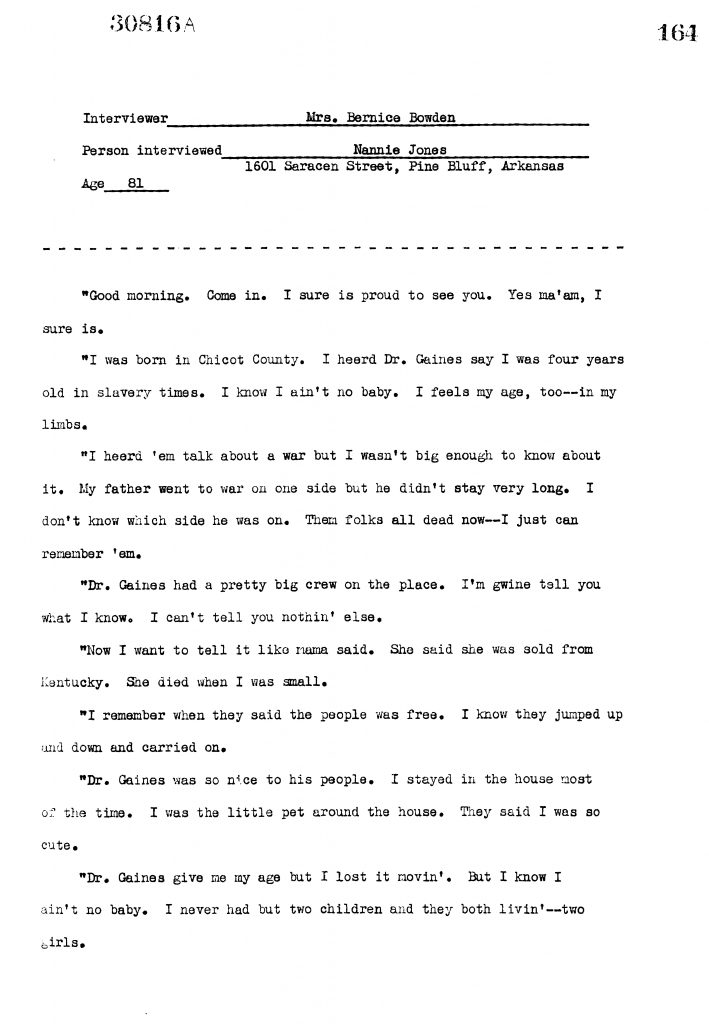 Nannie Jones: “My father went to war on one side but he didn’t stay very long.”

Mattie Nelson was 72 years old when she was interviewed in Pine Bluff. She was born around 1865 during her family’s “emigration” from Texas. Her unnamed parents were enslaved by the Chapmans — Johnson and Elizabeth Chapman. The Chapmans, like many slaveholders in Arkansas trying to protect their property, took slaves to Texas in 1863. Mattie remembered “I member when I was a child mistress used to be so good to us. After surrender my parents stayed on there with the Chapmans…til they died.”

While her parents were illiterate, Mattie went to school. But still work called. Mattie began working at age six, rolling logs and cleaning up new ground.

Without her maiden name or her parents’ names, it was difficult to find more about her. However in the 1940 Census, she is still living in Pine Bluff.  The 75 year old is a widow and taking care of her grandson, Fred Burt, age 9.

William Lattimore, 78 years old when interviewed in Pine Bluff, likely only spent a few years in Chicot County. He was born in Canton, Mississippi in 1859. He remembered Yankees soldiers’ arrival in Canton during the siege of Jackson in 1863. His father joined Col Ziegler’s 52nd US Colored Infantry that year.

After the Civil War, the family moved to Vicksburg and shunned an opportunity to return to their old plantation. He remembered “Mr. Lattimore [old master] came and wanted my father to live with him…before the surrender old master whipped my father over the head with a walking stick…and I was afraid he would whip him again.”

William went to school after freedom and went until he married. It’s difficult to piece together a concise timeline. However, he moved to Arkansas, first Chicot County and then Jefferson County. He became a school director at 18 and was elected justice of the peace (probably in Jefferson County).

There were three men with the last name Lattimore in Company G of the 52nd USCI–Reuben, Hilliard, and William. In the 1930 Census, a 65 year old William Latimer [sic] of Pine Bluff lists his father’s birthplace as Virginia. According to service records, Hilliard Lattimore was born in Virginia. However, in the 1900 Census a William Latimore in Chicot County, born in Mississippi in 1852, lists his father as born in Tennessee. The William Lattimore that served was born in Davidson, Tennessee. Further research into the soliders’ pension files would lead to more information.

The full text of most of the WPA slave narratives are available on the Library of Congress’s Born in Slavery: Slave Narratives from the Federal Writers’ Project, 1936-1938.