The artifacts have gone across the county from Lakeport to Greenville to Memphis, and then onto California and Washington as the Johnson family moved west.  Linnie Rose acquired the pieces from her mother,  Catherine Verlinda Johnson Rose, who received them from her father, Dr. Victor Johnson.  Victor, the youngest son of Lycurgus and Lydia Johnson, was the last Johnson to live at Lakeport.  He and his family moved to Greenville, Mississippi in 1917.  Ten years later, following the flood of 1927, the family moved to Memphis.   In 2008, Sharon Rose, Linnie’s sister, donated a washstand that is similar the washstand received today.  Underneath the gray marble top is a shipping label that reads, “L.J. Lakeport, Ark.”  Sharon remembers both wash stands being in her family’s home.  She stated “I’m so happy Glenn donated those items to Lakeport; it’s where they belong.”
The Lakeport Plantation house is an Arkansas State University Heritage Site.   Built for Lycurgus and Lydia Johnson in 1859, the Greek Revival home is one of Arkansas’ premiere historic structures and is now the only remaining antebellum plantation home in Arkansas on the Mississippi River.  The Johnson family retained ownership of the house until 1927, when the Chicot County plantation was purchased by Sam Epstein.  The house was added to the National Register in 1974 and was gifted to Arkansas State University in 2001 by the Sam Epstein Angel Family.  Following a massive restoration effort, the home opened to the public on September 28, 2007.
Feb172011February 17, 2011November 19, 20144Commentsby itswebteam 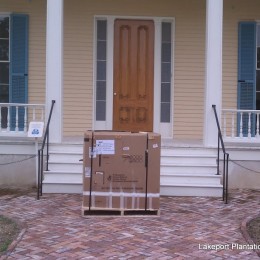 Can you guess what came special delivery to Lakeport today?
Stay tuned. 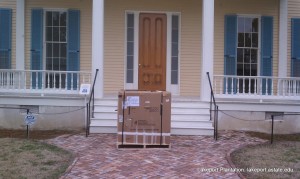 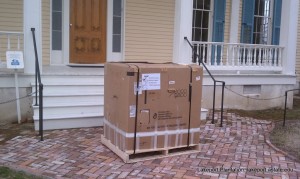 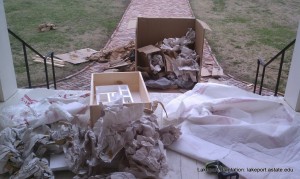 The folks at Ship Smart are some amazing packers: 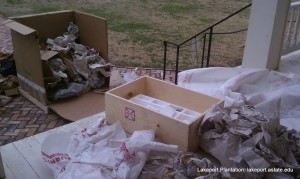 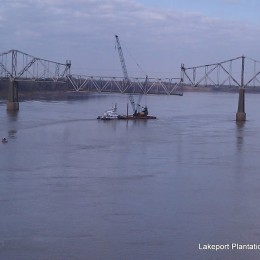 The old Highway 82 bridge (Benjamin G. Humphreys Bridge) is no longer in one piece.  Last week the eastern part of the bridge was taken out through a small explosion (I almost fell out of my chair at Lakeport).  This morning the center part of the bridge is being lowered on to a barge(s).

Link to last summer’s blog entry on the old bridge:

Remembering the Old Bridge; Getting Ready for the New 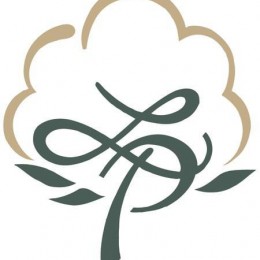 Posted in event, Mark Twain
Twain on the Plantation
Saturday
February 26, 2011
2:00 – 3:00 p.m.
Delta radio and television personality, David Lush, will present his Mark Twain at the Lakeport Plantation on Saturday, February 26, 2011.
A tour of the Lakeport Plantation home will begin at 12:30 pm.  At 2 pm, Mark Twain will entertain guests of the Plantation with his tales (some tall; some short) of his adventures as a Mississippi riverboat pilot.
Seating is limited to the first 50 guests.   RSVP by Friday, Feb. 18th  (870) 265-6031  Free Admission  and refreshments.
“The doors will open at 12 o’clock, and the trouble will begin at 2.” 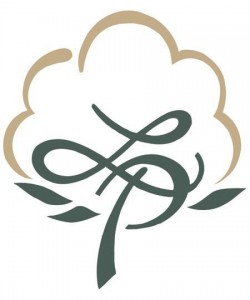