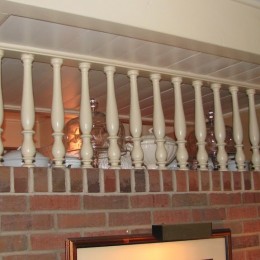 The Season of giving is the perfect time to reflect on the gifts Lakeport has received in 2012.

In April Lakeport received nineteen of the original balusters that had been removed and placed in Helen Epstein Kantor’s Greenville home ca 1950. Read more about the balusters in the post:  Balusters Return to Lakeport!

In June Richard M. Johnson, brought Lakeport a number of goodies for a long-term loan. We received several books; Two books, from the 1830s, belonged to Richard’s great-grandfather Lycurgus L. Johnson; the remainder of the books belonged to Richard’s grandfather, Dr. Victor M. Johnson and included medical texts, a bee keeping manual, and literary volumes. Richard also brought Lakeport his grandmother Martha Johnson’s beaten biscuit maker, his grandfather’s bee foundation maker, and a cradle that was in use in the family from the 1870s into the 1970s. Richard also donated a love seat which needs restoration.

In September, during the opening of our exhibits, we received several donations.

The 1908 photo’s location in Greenville has proved a bit of a mystery. There seems to be an iconic rose window in the background that might be a church. Victor and Martha were introduced at the First Christian Church in Greenville, a church his sisters Linnie Johnson and Annie Johnson Starling founded. But the structure in the background doesn’t seem to resemble known images of the Christian Church (like this one at the Mississippi Department of Archives & History) or any other turn of the century church in Greenville.

Bill Gamble, a Greenville resident and a descendant of Lyne Starling, donated Lyne’s 1871 Yale Yearbook. The Starlings, led by William Starling, purchased Sunnyside Plantation in 1868. Lyne’s brother Charles also attended Yale that year and married Annie Johnson at Lakeport in 1878. You can read about their sister Lollie’s memories of Lakeport in the post Laura (Lollie) P. Starling (1854-1946).

Finally, two portraits were shared with Lakeport.  One is a portrait of Sam Epstein, who bought Lakeport in 1927 from Victor Johnson. It is on loan to Lakeport from Lynda Festinger White, grand daughter of Mr. Epstein.

Thank you to all the donors in 2012 and years past! Donations deepen our understanding of Lakeport’s history and create a richer experience for visitors.

The artifacts have gone across the county from Lakeport to Greenville to Memphis, and then onto California and Washington as the Johnson family moved west.  Linnie Rose acquired the pieces from her mother,  Catherine Verlinda Johnson Rose, who received them from her father, Dr. Victor Johnson.  Victor, the youngest son of Lycurgus and Lydia Johnson, was the last Johnson to live at Lakeport.  He and his family moved to Greenville, Mississippi in 1917.  Ten years later, following the flood of 1927, the family moved to Memphis.   In 2008, Sharon Rose, Linnie’s sister, donated a washstand that is similar the washstand received today.  Underneath the gray marble top is a shipping label that reads, “L.J. Lakeport, Ark.”  Sharon remembers both wash stands being in her family’s home.  She stated “I’m so happy Glenn donated those items to Lakeport; it’s where they belong.”
The Lakeport Plantation house is an Arkansas State University Heritage Site.   Built for Lycurgus and Lydia Johnson in 1859, the Greek Revival home is one of Arkansas’ premiere historic structures and is now the only remaining antebellum plantation home in Arkansas on the Mississippi River.  The Johnson family retained ownership of the house until 1927, when the Chicot County plantation was purchased by Sam Epstein.  The house was added to the National Register in 1974 and was gifted to Arkansas State University in 2001 by the Sam Epstein Angel Family.  Following a massive restoration effort, the home opened to the public on September 28, 2007.