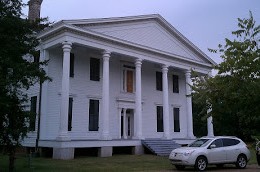 Last Tuesday my wife and I made a trip up to Benoit, Mississippi to see restoration work on Bolivar County’s last antebellum plantation home–The Hollywood Plantation (Burrus Home or “Baby Doll House”) .

Overseeing the restoration of the ca. 1858 home is Eustace Winn, a descendant of the original owner. Eustace has visited Lakeport on several occasions to check on our progress and compare notes.
John C. Burrus began construction on the Hollywood Plantation around 1858. According to the 1860 Census, nine Burrus family members lived in the house–the 45 year old J. C. Burrus, his 39 year old wife, Louisa, and seven younger Burruses ranging from 20 to 2. The two-story Greek Revival, was likely unfinished as the Civil War began in 1861. Most notably, the second story door lacks a balcony. This is a familiar theme for a home built so late in the antebellum period. We tell a similar story about Lakeport and how its interior was likely unfinished–unpainted, bare plaster walls, a missing medallion, and an unfinished ceiling medallion.
As far as I could tell in my limited search, there is not a lot of academic history written about the home or the Burrus family. James Cobb in The Most Southern Place on Earth: The Mississippi Delta and the Roots of Regional Identity (1992) mentions John and Louisa three times, citing the John C. Burrus Papers at the Mississippi Department of Archives & History, as well as a family account of the Civil War published in the Journal of the Bolivar County History Society in 1978. Citations of the Burrus Papers also appear in Harold Woodman’s King Cotton & His Retainers: Financing & Marketing the Cotton Crops of the South, 1800-1925 (1968).
The Historic American Buildings Survey documented the home 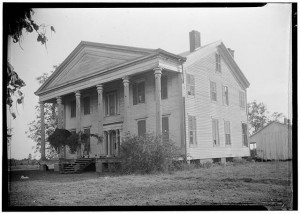 in 1936 as the “Burris House.” In 1936 the house was likely vacant, but, from exterior photos, in decent condition.
Hollywood is most famous as the setting of the 1956 film Baby Doll. However, by 1956, Richard Sylbert, set director for Baby Doll, described the house as “a dilapidated, ramshackle, and hollow wreck.” Four of the columns were laying on the ground and the building “listed to the left about five or six degrees.” The interior was worse: “the entire stair railing, balusters, and curved handrail were gone”; “parts of floors burned away”; and “the walls had huge areas where the plaster had come free of the lathe.” According to Sylbert, the house was straitened, walls and ceiling were repaired “to exactly the state the story required.” (That last phrase definitely sticks out to me.) The stairway was also reconstructed. Sylbert claims to have found an original spindle sticking out of the yard; it was used to reproduce all the spindles you see in the film.

Until just a few years ago, Hollywood was again a shell, as evidence from this 2005 photo in Flickr. Even the Corinthian columns added by the set designers were gone. (Correction– The Baby Doll movie seems to show original columns, so Corinthian columns were likely added later by the by whom, then? .) 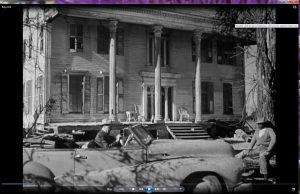 This image from the 1956 film Baby Doll seems to show the original Doric columns. It is not clear when the Corinthian order columns were added.

Eustace is making great progress since he began working on the family project three years ago. The new front columns, made of solid redwood from Washington state, replicate the originals and the interior is coming back to life again with new plaster, new woodwork that compliments what was left of the original, and, most recently, new stairs. When the restoration is finished, Hollywood will be open for tours and available for events.

After our tour, we headed up the road to Rosedale for some great food at the Blue Levee.

If the history and restoration of the Burrus House interests you, then you should visit the Lakeport Plantation across the river in Chicot County, Arkansas.  Lakeport is the last antebellum home in Arkansas along the Mississippi River.  Click here to learn about visiting Lakeport.

Update (12/17/2012):  The Hollywood Plantation opened to the public in June 2012.  It is available for rentals and tours by appointment. We’ve had several groups schedule tours at Hollywood & Lakeport the same day. Visit their website — http://www.hollywoodplantation.com 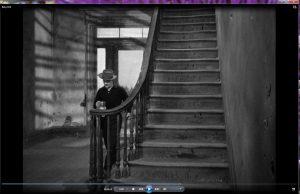 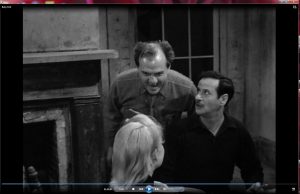 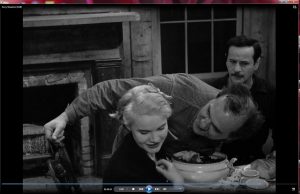 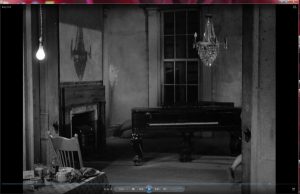