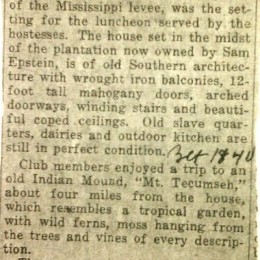 While doing research at the Arkansas History Commission in the Clara B. Eno Collection, which contains the source material for her 1939 book, Historic Places in Arkansas, I found a June 1935 article about the Lake Chicot Garden Club’s visit to Lakeport.

By 1935 Lakeport had been vacated by the Johnsons, who moved to Greenville, Mississippi, and sold to Sam Epstein.  Frank Dantzler and his wife, Fannie (both originally from Macon, Mississippi), occupied the home and ran the plantation for Mr. Epstein.  Mrs. Dantzler died in 1936 and Mr. Dantzler continued to operate the plantation until 1950.  He died in 1952.  Both are buried in Odd Fellows Cemetery in Macon.

Commentary: The ornamental iron is cast iron, the doors are 10′ 8″ pine with a faux grain in oak and rosewood, and there is only one arch in the house.  There was probably only one dairy and the “outdoor kitchen” was likely the smokehouse, since the kitchen, with a built in cast iron stove, is attached to the house. I’m very curious about the “old slave quarters”; is it the collection of building north of the house captured in a 1927 photo during the flood?  We have since decided these buildings date to after 1870, probably to the time Victor Johnson ran the plantation.

Eno listed 11 historic places in the Chicot County (vs. 34 in her home county of Crawford). 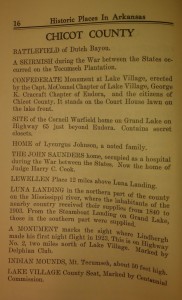 2. A Skirmish during the War between States occurred on the Tecumseh Plantation.

3. Confederate Monument at Lake Village, erected by the Capt. McConnel Chapter of Lake Village, George K. Cracraft Chapter of Eudora, and the citizens of Chicot County.  It stands on the Court House lawn on the lake front.

4. Site of the Corneil Warfield home on Grand Lake on Highway 65 just beyond Eudora.  It contains secret closets.

6. The John Saunder home, occupied as a hospital during the War between the States.  Now the home of Judge Harry C. Cook.

8.  Luna Landing in the northern part of the county on the Mississippi river, where the inhabitants of the nearby county received their supplies from 1840 to 1903.  From the Steamboat Landing on Grand Lake, those in the southern part were supplied.

9. A monument marks the sight where Lindbergh made his first night flight in 1923.  This is on Highway No. 2, two miles north of Lake Village.  Marked by the Delphian Club.

I plan on visiting Eno’s sites and updating their description.  Check back for more information.