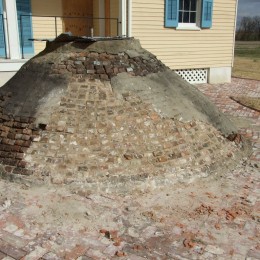 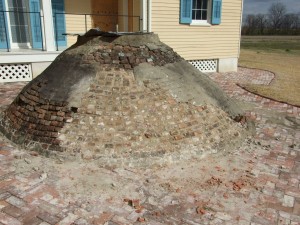 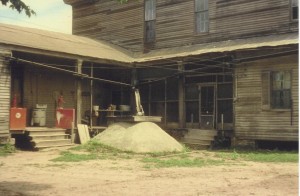 The hole was likely created by trucks that backed
up to deliver goods to the commissary, which was in use as late as 1984.
The large cistern is one of two cisterns at Lakeport Plantation.  They were part of the original water collection system that directed water away from
the house and collected water for domestic use.
Rain water was captured by the built-in/box gutters on the second story of the house and half-round gutters found along the ell porch.  The water was then directed by downspouts into brick collection boxes in the brick walkway.  The water was strained and then flowed into underground troughs that originally fed into the cisterns.  Today, rainwater is directed into several collection boxes in the yard and the cisterns have been filled with sand for safety.  Uses for the water in the cisterns would have included washing, cooking, cleaning, and drinking.
To repair the cistern, a form had to be fashioned to hold the bricks in place 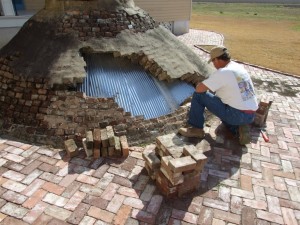 as the mortar set.
A local carpenter, Keith Carpenter (his real name), decided to use sheet metal as the form–though not what would have been used in the 19th century, it does the job using the same principle.
Once the form was in place, Lester Davidson, a mason who has worked at Lakeport before, was able to patch the hole using bricks left over from the restoration and a mortar created from lime putty and local river sand.
Click on the slideshow below to see more pictures of the work on the cistern and shots of the guttering system as well.