The artifacts have gone across the county from Lakeport to Greenville to Memphis, and then onto California and Washington as the Johnson family moved west.  Linnie Rose acquired the pieces from her mother,  Catherine Verlinda Johnson Rose, who received them from her father, Dr. Victor Johnson.  Victor, the youngest son of Lycurgus and Lydia Johnson, was the last Johnson to live at Lakeport.  He and his family moved to Greenville, Mississippi in 1917.  Ten years later, following the flood of 1927, the family moved to Memphis.   In 2008, Sharon Rose, Linnie’s sister, donated a washstand that is similar the washstand received today.  Underneath the gray marble top is a shipping label that reads, “L.J. Lakeport, Ark.”  Sharon remembers both wash stands being in her family’s home.  She stated “I’m so happy Glenn donated those items to Lakeport; it’s where they belong.”
The Lakeport Plantation house is an Arkansas State University Heritage Site.   Built for Lycurgus and Lydia Johnson in 1859, the Greek Revival home is one of Arkansas’ premiere historic structures and is now the only remaining antebellum plantation home in Arkansas on the Mississippi River.  The Johnson family retained ownership of the house until 1927, when the Chicot County plantation was purchased by Sam Epstein.  The house was added to the National Register in 1974 and was gifted to Arkansas State University in 2001 by the Sam Epstein Angel Family.  Following a massive restoration effort, the home opened to the public on September 28, 2007.
Nov022010November 2, 2010November 22, 2016by itswebteam 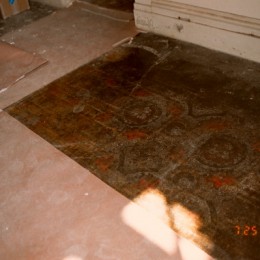 Posted in floor cloth, Kentucky, Louisville, oil cloth
The ca. 1860 floor cloth was one of the most exciting finds during Lakeport’s restoration. 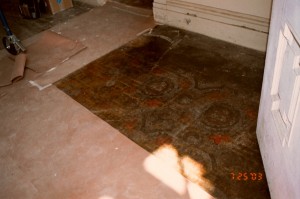 The wall to wall (15’ x 9” x 26’ 2”) floor cloth (or oil cloth) was rediscovered in the entry room during restoration, having been previously documented by the Arkansas Historic Preservation Program in the 1970s.  Canvas floor cloths were often painted to give them the look of carpet, but with increased durability.  The floral and medallion composition of the design conforms to known woven carpet patterns of the period.
The two sections displayed have been cleaned and conserved by Becky Witsell’s Studio Werk in Little Rock.  Analysis revealed the cloth, painted with fourteen colors, is “composed of Bast fibers which are linen, flax, hemp or jute.”
Additionally, two labels were discovered underneath the floor cloth, which also transposed on the flooring.  In the southeast corner a shipping label states, “L. L. Johnson, Lakeport, Ark.”  While at the threshold to the entry of the home, a worn dealer’s mark partially reads, “Fr[om] Hi[?], Louisville, KY.”
The worn dealer’s label has always been a source of frustration.  The fact that it read Louisville, KY is interesting, because the Johnson’s are from Kentucky and other materials for the house are also coming from that area–Wallace & Lithgow Stove, as well as the mantels (Madison, Indiana).  But we have always wanted to know who “Hi[?]” was.  Well, thanks to a little bit of historical research, we can, with some certainty, say that the importer of the floor cloth was the firm of “Hite & Small” in Louisiville, KY.

From knowing that, we looked in the 1859 Hawes’ Kentucky State Gazetteer and Business Directory on microfilm and found “Hite & Small” under “Hi”.

Since they are importers, the floor cloth could very well be made somewhere else [There were floor cloth makers in Kentucky in the mid-19th century].

There is also an 1859 City Directory online (difficult to search thru, though).  There, we find Hite’s and Small’s full names (William C. Hite and George W. Small) 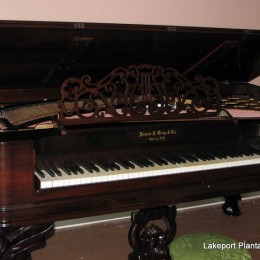 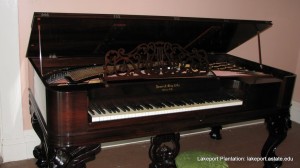 
P.S. Our next event will be Barry Bradshaw talking about restoring the piano. Time and Date still to be determined.
Dec172009December 17, 2009November 22, 2016by itswebteam

On Monday, December 14, 2009, Dr. Hal Rucks Sessions III and his wife Marilyn presented the 1856 Luna Plantation Bell to the Lakeport Plantation Museum. The bell will be on permanent display on the grounds of the antebellum Lakeport home.

The 1200 lb Luna Plantation Bell is ornately decorated with lyres, cherubs and roses. It was cast at the Buckeye Foundry in Cincinnati, Ohio by George W. Coffin. It has not been back in Chicot County since the around 1880, when it left Luna Plantation for the Glen Aubin Plantation in Coahoma County, Mississippi.

Daniel and Richard Sessions, brothers, came to Chicot County in the 1840s from Natchez, Mississippi. The brothers owned Luna Plantation, north of Lake Chicot, from about 1844 until 1878. The Johnsons of Lakeport knew Luna and the Sessions very well. Lydia Johnson’s sister, Theodosia Taylor Sessions, was married to Daniel Sessions. In addition, the only known surviving letter from Lycurgus to Lydia was written to her while she was visiting the Sessions at Luna and he was on a steamer headed for Lexington, Kentucky.